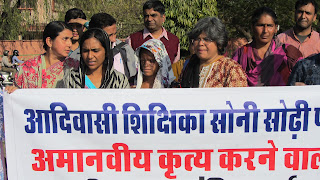 I have just read the story on Soni Sori written by Ashutosh Bharadwaj in the Indian Express.  There are some facts that the story has got completely wrong. Such as that there were X-ray scans of Soni conducted in Chhattisgarh which did not show the stones in her body.  While the truth is that the X-ray images taken in Chhattisgarh were taken of her back (at a higher level). The stones were lodged in the rectum and the vagina which are at a lower level.  No X-ray images were taken of these portions.  The Supreme Court has been informed of these X-ray reports.
The hospital in Kolkata is also a government hospital. The only difference is that the Chhattisgarh government does not have any influence over that hospital.
At another place in the story, it is said that Soni Sori used to carry money for the Naxalites.  But the reporter himself admits that she and her husband Anil Futane are not involved in the attack on Avadhesh Gautam’s house.  Thus, the facts themselves are screaming that the police story about the duo’s participation in the Avadhesh Gautam case is a complete falsification.  To base an entire newspaper story on mere hearsay, when the innocent victim cannot defend herself, is sheer injustice.   If the reporter himself agrees that the charges against them in the Avadhesh Gautam case are fabricated, then why should anyone believe the other imaginary allegations?
For the reporter to question why it took Soni so long to talk about her torture, illustrates his immaturity and his inability to understand the circumstances.  After being so brutally tortured with electric shocks and mercilessly beaten, any women would take some time to emerge out of her fears.  If the blessed reporter had kept in mind a member of his own family in the place of Soni, he would have understood why it would have taken her some to time to talk about this torture.
It is also a lie for the reporter to say that I do not recognize the handwriting of Soni.  I know the handwriting of Soni very well.  It is apparent from the article that the reporter met with Soni Sori after these letters were released, and even asked her how she sends these letters.  Soni admitted that the letters are written by her; hence, it is inappropriate of him to doubt their authenticity.
After reading the article, it appears that the reporter is less worried about horror of what happened to Soni and what has become known through these letters. Instead, he seems to be more worried about who is responsible for bringing these letters out.  It is as if bringing these letters out is a bigger crime than the cruel torture meted out to Soni.
I had already written in 2010 in my blog, Dantewada Vani, that Soni is being ensnared in these false cases, so that she can be pressured into giving Linga into Kalluri’s custody.  And so, Kalluri can kill Linga.  This was because Kalluri had already tortured Linga while keeping him in illegal detention earlier.  And now that Linga was going to become a journalist, Kalluri was scared that his acts would come to light.  In order to entrap Linga, Kalluri had also issued a press release in which Linga was declared to be the spokesperson of the Maoist party, and it was said that he was supported by Medha Patkar, Nandini Sundar, Arundhati Roy and Himanshu Kumar.  Although Kalluri never signed that press release out of fear.  Afterwards, when this press release was ridiculed throughout the country, the police went into hiding.  Later, Linga returned to Dantewada and started living there, but he was never arrested in this matter, even though he met with the Collector and the Commissioner, and even used to visit the police station.
Incidentally, while Linga was in Delhi, he had signed an affidavit which had his story and said that he feared that he would be arrested upon his return to Dantewada, and eventually killed.  And this is exactly how it has happened.  We have that affidavit. It has been filed in the court.
- Himanshu Kumar
Posted by Himanshu Kumar at Monday, August 06, 2012